Whilst in New York last month I had one absolute deal breaker. We had to go to Death & Co. and have a cocktail. I didn’t care how far we had to walk, how long we had to wait, how much a drink cost, I was going to make the pilgrimage.

Then I made the discovery that the apartment we were staying in was only four blocks away, and on our first night in the city, having been off the plane for less than three hours I somehow managed to persuade my ever-suffering husband to “just swing past to check it out.” This inevitably lead to us enquiring about the wait, lingering in the area for the required time, then being ushered through the thick black curtains behind the hefty wooden door. From that moment, as our eyes adjusted to the almost ridiculously dark room and I took in the vast array of bottles, bitters and bar tools, I knew that a dangerous precedent had been set. Before even the slightest sip of spirit had passed my lips I knew I was head over heels in love and would have to spend as much time as possible in this small dark cocktail haven.

As it happened we managed to frequent Death & Co three times during our five night stay, and it meant we were able to experience not only some of their ingenious concoctions, (Their current menu demonstrates just how varied their talents are) but also sample how they approach our favourite classics.  We had Manhattans made by two different bartenders, both delicious, both subtly different. It really demonstrated how nuanced cocktails can be, and how the same drink made by different people can taste so distinct. 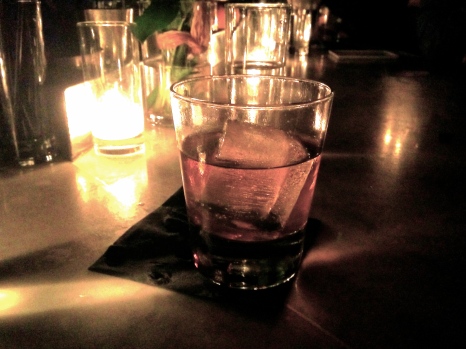 Whilst there my husband learned of his love for the Old Fashioned, and I finally grasped why such a simple drink works so well. I’d always been fairly dismissive of the Old Fashioned. I didn’t really understand why anyone would choose it as a cocktail rather than just having a straight glass of Bourbon or Rye. Then I had a sip of one made properly and an epiphany occurred. It was so much more than the sum of it’s parts, far more complex than I imagined a drink with such basic construction could be. As a result I returned home with the resolve to learn how to make one that would meet Mr L’s exacting standards. Below is the result, and despite the warm weather it has continued to be our late-night favourite. I hope you enjoy it too.

To make a rich syrup, heat two parts brown sugar with one part water in a small pan until the sugar dissolves, then cool before using. It will keep well so I always have a small jar in the fridge.

I serve my Old Fashioned on the rocks, using one large piece of ice, but you can use whatever you have or serve it up if that’s your preference.

Strip of orange peel for garnish.

Place the ingredients (except the peel) in a shaker or mixing glass over ice and stir for a minute to achieve dilution, strain into a large rocks glass and add the orange peel.

I have two variations on this recipe that we also drink, one using maple syrup in place of the rich syrup, the other using Rye instead (which is actually my version of choice).