I am feeling rather out of synch at the moment. Things are moving so fast both at home and at work that whilst the big things are being achieved and ticked off the lists, little things are getting missed.

As a result I came downstairs this morning to a desperate scene. Mr L was sitting in his chair in the living room without a cup of coffee in his hand. My eyes automatically scanned the wooden chest in front of him. Nope, no mug in evidence there. At which point he turned slowly to me and said in the flat tone of someone in considerable shock “no coffee”.

“What do you mean no coffee?”

“We have no coffee. Not in the caddy, not in the cupboard, I couldn’t find any in the house. We must have used the last lot yesterday and not noticed”

As he returned to whatever he was reading to distract himself from the inevitability of a commute without the morning caffeine hit, the true extend of the situation became apparent.

“And there’s nothing for breakfast” I mumbled whilst slowly walking towards our barren kitchen.

I’m a toast in the morning kind of a person. Or muesli, or homemade granola. I like a good pastry on a special occasion, but not during the week. I’d love to be able to eat something protein-based such as eggs, but I can’t abide their texture and thus they sit dejected on the side until a weekend cake baking ensues.

This leaves only one possibility for an emergency breakfast. Porridge. 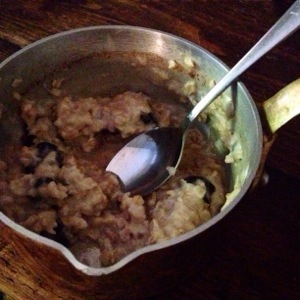 Don’t get me wrong, I like a good bowl or porridge. I like the endless mix-in and topping possibilities. I like the warmth of it on a chilly morning. I like the creaminess if made with all milk and the frugality of it made with water. What I don’t like is that an hour after eating the largest portion I can manage my stomach is growling and I’m scrabbling around for something to refill it.

This mornings porridge was made in a small copper pot and eaten out of it too as all the bowls were in the dishwasher which I turned on before thinking to rescue one. I used all milk, added a dash of cinnamon, a handful of dried sour cherries and as an extra piece of Friday indulgence, a slug of maple syrup.

It was tasty and warming and rather quaint to spoon out of the little pan at our dining room table.

And fortunately there is bread and peanut butter stashed at work alongside a freshly ground bag of coffee.

One thought on “Out of synch.”